Back to Action fields - Organisational futuring

The Latin root of the word “motivation” means “to move”; hence, in this basic sense the study of motivation is the study of action. Modern theories of motivation focus more specifically on the relation of beliefs, values, and goals with action.

Relations of Motivation within Organisational futuring (and Corporate futuring) 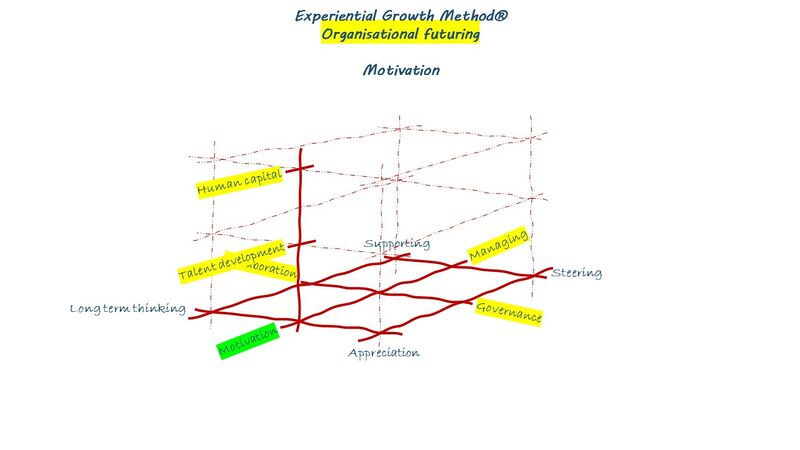 There exists a close vertical relationship within Organisational futuring:

On the Inner focus level, an affiliation exists with:

Corporate futuring and Organisational futuring intertwine, on the Inner focus level, through:

Questions we can ask ourselves when contemplating Motivation

Bandura proposed a social cognitive model of motivation focused on the role of perceptions of efficacy and human agency. Bandura defined self-efficacy as individuals' confidence in their ability to organise and execute a given course of action to solve a problem or accomplish a task. He characterised it as a multidimensional construct that varies in strength, generality, and level.

As in expectancy-value theory and attribution theory, Bandura's self-efficacy theory focuses on expectancies for success. However, Bandura distinguished between two kinds of expectancy beliefs: outcome expectations—beliefs that certain behaviours will lead to specific outcomes —and efficacy expectations—beliefs about whether one can effectively perform the behaviours necessary to produce the result. Indeed, Bandura proposed that individuals' efficacy expectations are the primary determinant of goal setting, activity choice, willingness to expend effort and persistence.

Locus of control theory is another type of expectancy-based theory. One should expect to succeed to the extent that one feels in control of one's successes and failures. Evidence supports this prediction. Recent locus of control theorists have elaborated broader conceptual models of control. They hypothesised that the extent to which needs are fulfilled is influenced by following characteristics of their contexts: the amount of structure, the degree of autonomy provided, and the level of involvement. Finally, they proposed that how these needs are fulfilled determines engagement in different activities. When the needs are fulfilled, we will be fully engaged. Agency beliefs are the expectations that one has access to the means needed to produce various outcomes. Control beliefs are the expectations individuals have that they can produce desired events.

Theories focused on the reason for engagement

Given the growing evidence that extrinsic incentives and pressures can undermine motivation to perform even inherently interesting activities, Deci & Ryan proposed self-determination theory in which they integrated two perspectives on human motivation: humans are motivated to maintain an optimal level of stimulation, and humans have basic needs for competence and personal causation or self-determination. They argued that people seek out optimal stimulation and challenging activities and find these activities intrinsically motivating because they have a basic need for competence.

In addition, they argued that intrinsic motivation is maintained only when actors feel competent and self-determined. Consider, for example, a person who consciously and without any external pressure selects a specific job because it will help him earn money. This person is guided by his basic needs for competence and self-determination, but his choice of the job is based on reasons extrinsic to the job itself. Finally, Deci&Ryan postulated that a basic need for interpersonal relatedness explains why people turn external goals into internal goals through internalisation.

Csikszentmihalyi defined intrinsically motivated behaviour as the immediate subjective experience that occurs when people are engaged in an activity and feel in control of one's actions and the environment.

Flow is only possible when a person feels that the opportunities for action in a given situation match their ability to master the challenges. The challenge of an activity may be concrete or physical, like the peak of a mountain to be scaled or abstract and symbolic, like a set of musical notes to be performed, a story to be written, or a puzzle to be solved. Deci & Ryan conceptualise intrinsic motivation regarding innate, basic needs, whereas Csikszentmihalyi stresses subjective experience.

We suggest, however, that this difference reflects two sides of the same coin. First, Schneider has argued that one must distinguish between immediate and ultimate reasons for behaviour. Intrinsically motivated behaviour can be conducive to ultimate goals even though the actor is only motivated by direct incentives. This distinction between immediate and ultimate causes of behaviour makes it possible to reconcile the positions of Deci & Ryan and Csikszentmihalyi. Deci & Ryan focus on ultimate reasons for behaviour, whereas Csikszentmihalyi focuses on immediate causes. Second, Csikszentmihalyi & Massimini have suggested that the flow experience is a reward that ensures that individuals seek to increase their competence.

These researchers define this enduring intrinsic motivational orientation as the preference for demanding or challenging tasks, learning driven by curiosity or interest, and striving for competence and mastery. Of course, both preferences for challenging tasks and striving for competence can be linked to either extrinsic or general need-achievement motivation. Nonetheless, empirical findings suggest that the three components are highly correlated.

We differentiate between individual and situational interest. Value-related valences refer to the attribution of personal significance or importance to an object or activity. In addition, both feeling-related and value-related valences are directly related to the object or activity rather than the relation of this object or action to other objects or events. For example, if people associate mathematics with high personal significance because mathematics can help them get prestigious jobs, we would not speak of interest. Although feeling-related and value-related valences are highly correlated, it is helpful to differentiate between them because some individual interests are likely based primarily on feelings. In contrast, other interests are more likely to be based on personal significance. Much research on individual interest has focused on its relation to the quality of learning.

Bandura and Schunk have shown that specific, proximal, and somewhat challenging goals promote self-efficacy and improved performance. Other researchers have defined and investigated broader goal orientations. For example, Nicholls and his colleagues described two significant motivationally relevant goal patterns or orientations: ego-involved goals and task-involved goals. Individuals with ego-involved goals seek to maximise favourable evaluations of their competence and minimise negative competence evaluations. Task-involved people choose challenging tasks and are more concerned with their progress than with outperforming others.

Weiner and his colleagues identified ability, effort, task difficulty, and luck as the most crucial achievement attributions. The stability dimension captures whether causes change over time or not. For instance, ability was classified as a stable, internal cause, and effort was classified as unstable and internal. Finally, the locus of control dimension is linked most strongly to affective reactions.

In this model, both negative and positive task characteristics are assumed to influence choices. All choices are considered to have costs associated with them precisely because one choice often eliminates other options. Consequently, the relative value and probability of success of various options are key determinants of choice. Expectancies and values are assumed to influence performance, persistence, and task choice directly.

However, empirical work has shown that children and adolescents do not distinguish between these two different levels of beliefs. Even though these constructs can be theoretically distinguished from each other, they are highly related and empirically indistinguishable in real-world achievement situations.

Cost is conceptualized in terms of the negative aspects of engaging in the task, such as performance anxiety and fear of failure and success, as well as the amount of effort needed to succeed and the lost opportunities resulting from making one choice rather than another.

In his general expectancy-value model, Heckhausen attempted to integrate several different approaches to motivation. The resulting model distinguished four different types of expectancies: situation-outcome, action-outcome, action-by-situation-outcome, and outcome-consequence. It is important to note that in Heckhausen's model, outcomes are the immediate results of one's actions. These immediate results are or are not followed by various consequences. They do not have any incentive value on their own. Incentive value is only attributed to the effects of one's actions. Therefore, the motivation to act depends mainly on the value attached to the consequences of one's behaviour.

Like attribution theory, goal theory, and self-efficacy theory, modern expectancy-value theory can be criticized for emphasizing the rational cognitive processes leading to motivation and behaviour.

Covington discussed the strategies many develop to avoid appearing to lack ability. These include procrastination, making excuses, avoiding challenging tasks, and, perhaps most important, not trying. Covington suggested that reducing the frequency and salience of competitive, social comparative, and evaluative practices and focusing instead on effort, mastery, and improvement would allow more to maintain their self-worth without resorting to these failure-avoiding strategies.

In sum, the social cognitive view of self-regulation emphasises the importance of self-efficacy beliefs, causal attributions, and goal setting in regulating behaviour directed at accomplishing a task or activity. According to Zimmerman (2000), self-regulated learners have three important characteristics:

Some motivation researchers are interested in how motivation and cognition interact to influence self-regulated learning.

Winne & Marx posited that motivation should be conceived in cognitive processing terms and that motivational thoughts and beliefs are governed by the basic principles of cognitive psychology, differing from other thoughts and beliefs only in their content. They further discuss the conditions under which tasks are performed, the operations needed to complete the task, the product produced when the task is completed, the evaluation of the task and how motivation can influence each aspect.

Borkowski and his colleagues developed a model highlighting the interaction of the following cognitive, motivational, and self-processes: knowledge of oneself, domain-specific knowledge, strategy knowledge, and personal-motivational states. This model incorporates several components, including entry characteristics; the social aspects of the learning setting; several motivational constructs derived from expectancy-value and goal theories; and various cognitive constructs.

In support, Pintrich & De Groot found that achievement values determined initial engagement decisions. Their self-efficacy facilitated engagement and performance in conjunction with cognitive and self-regulation strategies. Pintrich et al. presented a more fully articulated discussion of links between motivation and cognition, explicitly referring to conceptual change. They discussed how traditional «cold» cognitive psychological models of conceptual change do not consider the motivational and contextual factors that likely influence conceptual development. They provided preliminary evidence of how motivational factors such as goals, achievement values, efficacy beliefs, and control beliefs can influence whether people change their mental concepts.

Theories of Motivation and Volition

Retrieved from "https://mystrategy.mywikis.wiki/w/index.php?title=Motivation&oldid=2828"
Categories:
Cookies help us deliver our services. By using our services, you agree to our use of cookies.