Back to Experiential Growth Method - How to think about growth

System Thinking is a lens through which we can look at the world. It is a worldview that percolates through other disciplines. The key idea is that flow is the main driver.

What is a system?

One of the basics of systems thinking is that "Every system is perfectly designed to get the results it gets".

Stocks and flows are the foundation of system dynamics modeling. But how exactly do they work?

Stocks are entities that can accumulate or be depleted, such as a bathtub, which fills with water from a faucet. Inventory and Installed Base are examples of stocks.

Flows, on the other hand, are entities that make stocks increase or decrease, like a faucet or drain affects the level of water in a bathtub. Production (which increases Inventory) and Purchases by Consumers (which increases Installed Base) are examples of flows.

Note that flows are the only variables that can change stocks. The presence of a flow indicates the movement of material; for example, the flow of inventory, cash, and so on. A useful rule of thumb is that, because flows capture activity, all of the things that you find on income and cash-flow statements (such as cost of goods sold, interest expense) are flows; these items represent financial activity during a specific period.

In contrast, all of the line items that you find on a balance sheet (such as assets and liabilities) are stocks; these items represent financial status at any point in time.

A technique commonly used to distinguish a stock from a flow is to consider what would happen in the system if time were to stop. Stocks, which are accumulations, would continue to exist.

Flows, however, would disappear, because they are actions. For example, at any given moment, inventory, the balance in your savings account, and the people in a conference room are measurable and, therefore, are stocks; they would continue to exist if time were to stop. On the other hand, the manufacturing rate of units per hour, the bank’s interest payment per day, and the movement of people in and out of a conference room would halt, because they are dependent on time.

Four ways we construct systems through our experiences

Distinctions (identity - other) are made between and among things and ideas. How we draw or define the boundaries of a statement or a system of beliefs is essential for understanding. Whenever we draw a border to describe a thing, that same boundary defines what is not the thing (the 'other'). Distinctions are used to challenge existing norms, labels, and definitions and identify biases in the way information is structured.

Relationships (action - reaction) are defined between and among things and ideas. Without understanding how parts and wholes are related, we cannot understand much about anything, including a system. Relationships come in all types: causal, correlation, direct/indirect, etc. Systems thinkers use connections to show dynamical interactions between things and ideas, including feedback loops to show reciprocal relations.

Organising things and ideas into part-whole systems (part - whole) helps make meaning. Systems thinkers know that changing the way ideas are organised changes meaning itself. The act of thinking is defined as splitting things up or lumping them together. Systems thinkers constantly consider context by asking, "what is this a part of?" to see how things fit into larger wholes than is the norm. 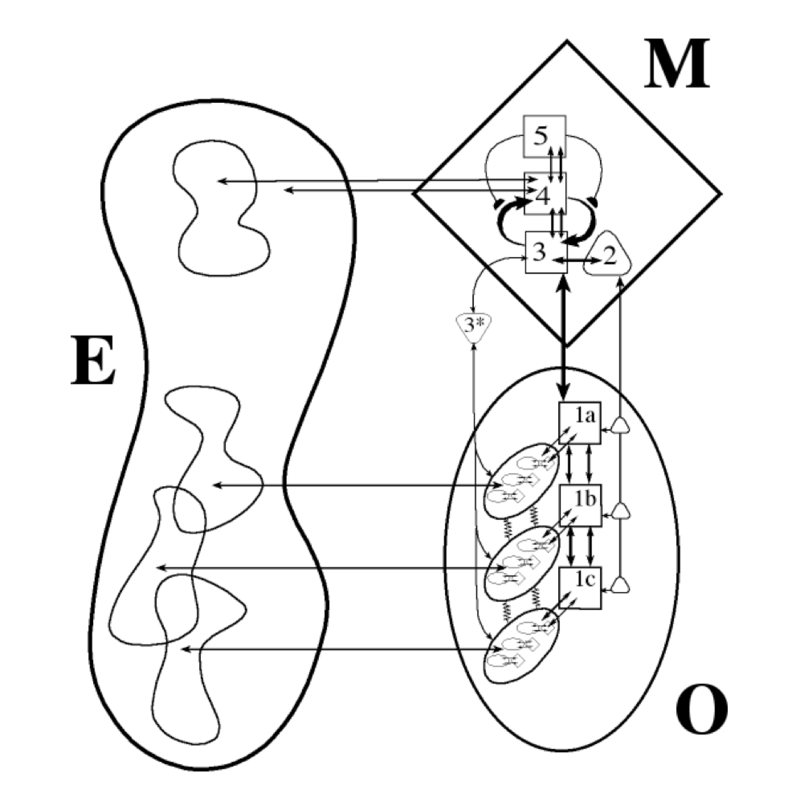 --- Stafford Beer, the inventor of the VSM described it as a “holistic model involving the intricate interactions of five identifiable but not separate subsystems”.  The model was developed during the 1950s while Beer was a manager in the steel industry in Sheffield (UK) as a practical tool capable of dealing with issues of organisational structure.

The VSM is firmly grounded in systems theory and is inspired by the way the brain co-ordinates the muscles and organs,  Its theoretical basis is Ashby’s work, particularly the Law of Requisite Variety,  Weiner’s development of cybernetics, the mathematics of recursive systems, and McCulloch’s theories of neural networks.

What emerges from all of this is a body of knowledge which describes the way that all viable systems work. Beer identified the invariances which apply universally, regardless of the size or nature of the viable system. It has been applied at all scales from small work-groups to nation states.

Beer’s first models were mathematical, but these proved impossible for most people to understand. He then designed the graphical model which illustrates the five subsystems (the building blocks of the VSM) and the “intricate interactions” which connect them.  The diagram also shows the interactions between the viable system and its environment – the niche within which it operates.

An understanding of the theory begins with the observation that operational units must be as autonomous as possible, and thus Beer’s model of sees any organisation as a cluster of autonomous operational parts which bind together in mutually supportive interactions to create a new, larger whole system,  Thus the job of management is to provide the “glue” which enables this to happen.  Beer named this function the Meta-system, which is defined as   “A collection of sub-systems which looks after the operational elements so that they cohere in that totality called the Viable System”

System 2 deals with the inevitable problems which emerge as a number of autonomous, self-organising operational parts interact.  There will be conflicts of interest which must be resolved. System 2 is there to harmonise the interactions, to keep the peace, to deal with the problems. Without a System 2, the system would shake itself to pieces.

System 3 is concerned with synergy.  It looks at the entire interacting cluster of operational units from its meta-systemic perspective and considers ways to maximise its effectiveness through collaboration.  System 3 ensures the whole system works better than the operational parts working in isolation.  Beer talks about an “explosion of potential” which emerges from collaboration and symbiotic relationships.  Without a System 3 this could not happen.

System 4 ensures the whole system can adapt to a rapidly changing and sometimes hostile environment.  It scans the outside world in which it operates, looks for threats and opportunities, undertakes research and simulations, and proposes plans to guide the system through the various possible pathways it could follow.   Without a System 4, the system would be unable to cope with the complexity of the external environment in which it operates.

System 5 provide closure to the whole system. It defines and develops the vision and values of the system through policies.  System 5 creates the identity, the ethos, the ground rules under which everyone operates.  It aligns the tasks of everyone in the organisation. In Beer’s words “Rules come from System 5:  not so much by stating them firmly, as by creating a corporate ethos – an atmosphere”

Without a System 5, fragmentation would be inevitable.

The interactions between these 5 sub-systems and the way they respond to and affect the external environment define the VSM.  The essence of these interactions are as follows:

Applications involve re-thinking the workings of any organisation in these terms. Take any enterprise and identify the operational parts: this is System 1.  How do conflicts of interest get resolved ? This is System 2.  As the process continues a diagram something like the figure shown above will develop. Once this is complete, the diagnosis can begin: are the identified systems properly connected ? Are they fit for purpose ? And so on.

After 50 years, no-one has been able to find a case study in which the VSM has failed: in all its many and varied applications it has provided insightful diagnosis and has directed organisational restructuring to create effective organisations, based on individual autonomy and creativity.

--- Stafford become more aware over time of the relevance of managing strategic conversations and of the need to create a learning context to support informed and up to date strategic decision making. One specific challenge for managing complexity is how to facilitate collective agreements on core strategic decisions for organisational viability (and sustainability). He designed Team Syntegrity as a tool to create a very effective collective learning context, for a large group of people needing to make joint decisions around a core strategic challenge or action. In particular, it complements the idea of a cybernetic group learning tool, to support the 3/4/5 homeostat explained in the VSM theory (Beer, 1979).

Fuller’s principle of Tensegrity – tensile  integrity – (Fuller,  1976; 1979), explains that structural integrity results from a particular  mix  of local  compressive stress  where structural members are  joined  together, with  an  overall  tensile  stress  that  characterises  the entire  system. Fuller demonstrated that the best physical structure in terms  of internal tensegrity is the icosahedron and this discovery proved very useful  for designing hyper stable structures, shaped as a geodesic dome. Stafford used this concept as an underlying principle to design a communication structure, able to handle the variety of the participants and  issues,  through structured meetings and debate of a complex issue; he aimed at creating a rich and democratic decision-making context.

Team  Syntegrity is the methodology supporting an  event  called  a Syntegration, normally oriented for collective  and  participatory decision making on crucial  issues  for organisational identity, development or policy  implementation. The event  will  typically last between 2.5 to 4.5 days,  with  between 2 to 4 iterations of discussions.  The TS is based on a model  of non-hierarchical social interactions, so it aims at facilitating participatory and  equitable dialogue among a group of people holding a diversity of views  (Beer, 1994).

A Team Syntegrity event starts by inviting a group of representatives from the stakeholders of a complex situation  to a 2 to 4 days intensive collaborative workshop, aiming to collectively agree on routes for joint action. The first stage of the event is to collectively agree on the opening question and the specific sub questions which should guide the agenda of debates for the following team meetings. Once the 12 topics have been agreed, and the participants are distributed into teams, the process begins. Each team (an infoset)  will have one or two meetings each day, to develop the agenda.

The teams’  organisation and  the distribution of the participants are both based  on the structure of the icosahedrons. Having 12 nodes, this provides the structure for the protocol of developing and  interrelating 12 topics  that  together constitute the issue  at hand. Each of the 30 participants plays three roles: a member in two  groups, a critic  in another two  groups, and  an observer in other  groups. Each group includes a facilitator, five participants, five critics, and observers. The icosahedron provides the pattern of interaction among teams, and participants, that  is shared equally by all.  The infoset is the team of people dealing with a specific topic, – sharing information and knowledge on a particular issue of concern  – to the best of their capabilities; and learning collectively in a very effective way. The closed communication system enabled by the icosahedron structure of meetings and participants allows reverberation to happen, producing logical closure as a consequence of the recurrent interactions of the participants. Stafford suggested that reverberation in a closed  system results in synergy. That is why B. Freesman (Beer, 1994a, p. 14) first coined the term Syntegrity  (‘synergistic tensegrity’) a mixture of synergy and  tensegrity. Stafford called his invention Team Syntegrity (TS) .

Team Syntegrity provides an effective learning context resulting in excellent teamwork by organising the infoset interactions  following cybernetic principles. Extensive use of Team  Syntegrity has demonstrated that  it can be particularly useful  for supporting teamwork related to planning, innovation and  knowledge acquisition processes.

Retrieved from "https://mystrategy.mywikis.wiki/w/index.php?title=Systems_Thinking&oldid=2606"
Categories:
Cookies help us deliver our services. By using our services, you agree to our use of cookies.